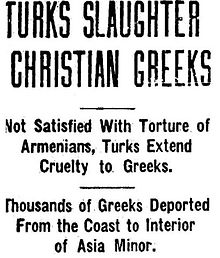 On 19 may, Hellenism commemorates the extermination of 353,000 Pontian Greeks killed during a genocide.

During the years 1914-1923, in the 1st World War, the Greek minority of the Ottoman Empire, the Republic of Turkey’s predecessor, were removed from Western Anatolia. An estimated 350 thousands Greeks were killed between 1913-1922, ending thousands of years of Hellenic civilization in Asia Minor.

Pontian and Anatolian Greeks were victims of broader Turkish genocide project at all Christian minorities in the Ottoman Empire. More than 3.5 million Greeks, Assyrians and Armenians were killed under the regimes of the Young Turks and of Mustafa Kemal.
The end of the genocide marked a profound rupture in the long Greek historical presence on the Asia.

The geographic extent and power of the Ottoman Empire began to decline over the 19th century as subjected peoples, began exerting their own nationalist aspirations. The Greeks successfully overthrew Ottoman rule during the War of Independence from 1821 to 1830, establishing the Modern Greek state as it is currently situated at the tip of the Balkan Peninsula.

The Young Turk movement emerged from this context, eventually aiming to turn the Ottoman Empire into a homogeneous Turkish nation state.

This political revolution occurred in 1912-1913, which ultimately ended 5 centuries of Ottoman rule. Afterwards, there was a diplomatic effort between the Greeks and the CUP to arrange a population exchange. However, the outbreak of WW I stunted this effort. Greek villages were plundered and terrorized under the pretext of internal security. The Greeks were generally accused as a disloyal and traitorous 5th-column, and eventually most of the population was rounded up and deported to the interior.

The demographic consequences of the Greek genocide are not objectively certain. The prewar population of Greeks was at least 2.5 million. Over the course of 1914 to 1923, about one million had migrated, some voluntarily but most under coercion. As many as 1.5 million Greeks died, either from massacre or exposure, although this figure is not positive. Presently, a minuscule Greek population remains in Turkey. Greek communities annually commemorate the genocide on September 14 in recognition of the Smyrna catastrophe.